this post has been moved here!
Posted by Cucicucicoo at 1:30 PM

SWEET!! I bet the sticky-packed foam board can be bought pretty cheeply from an art store.
You can also make stamps out of the styrofoam from electronics boxes, as long as you handle them with respective care. And making natural dyes are fun- juice from beets, dandelions, carrots, kale/chard/spinach...

oh yeah, you can find that foam board in any decently-stocked craft store in the USA and it's not excessively expensive. That's a point, that styrofoam would also work, though it's porous and has those sort of chunks that show up when stamping. plus it breaks way too easily and would have to be carved, not just cut.

how do you make natural dyes? I tried once to dye a t-shirt pink with beet juice, but it didn't work, maybe because I was using those pre-cooked beets (I never find raw beets here!). Can you use those dyes for stamping? do tell!!

I have used them myself, but only only once or twice. And I only used them on things I wouldn't need to wash (I don't know how to make it more permanent... salt? Anyone have any ideas?)
It's too bad you can't find raw beets there, they do work well. Other ideas are turmeric, coffee grounds for brown, marigolds for yellow. I've used the pure juice of a vegetable and used it for stamping. I haven't dyed an entire cloth. This is what little knowledge I have: generally if you simmer the ingredient with the cloth for a while, then let the cloth completely dry on its own (out of the sun, the sun can bleach the color out), it should work well. 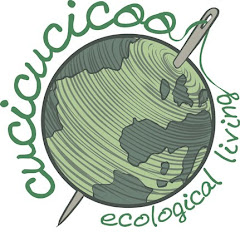 per il blog in italiano

come to my online shop!

who the heck am I?

what exactly is "cuci cuci coo" supposed to mean?

The title of this blog is a bilingual play on words that probably nobody will ever get, so I may as well just explain it. The cuci cuci part is up to interpretation, either from CUCIre (sew) and CUCInare (cook) or the command "Sew, sew!" You pronounce cuci "COO-chee," so I added the English coo to make it what you say to babies while tickling them: "Coochie coochie coo!"

Widgets for Etsy Sellers
Powered By

now where did I see that before?